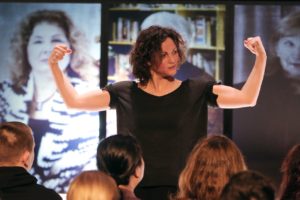 Specific roles of being a Soviet woman and multiple roles of being a post-Soviet woman are analysed in the performance “Dior in Moscow”, focusing on its transformation due to the Western experiences. Human body is the place of tradition, communication and authenticity. It listens, tells and retells stories and every time forms the identity from the perspective of place and time. The dramaturgical line of the performance is based on Dr Aneta Pavlenko’s “Socioeconomic Conditions and Discursive Construction of Women’s Identities in Post-Soviet Countries” (2002) and various interviews with elderly women from the Czech Republic and Lithuania.

Choreographer Agnija Šeiko got her MA degree at the Codarts Academy of Dance in Rotterdam (NL). At the moment she runs a dance theatre “PADI DAPI Fish” and is the author of more than 30 choreography works, which were/are performed at various dance festivals and venues both in Lithuania and abroad. In 2009 and 2012 she has been awarded with the “Golden Cross of the Stage”, the highest Lithuanian award for theatre achievements. Klaipėda city municipality has awarded her as the best choreographer of 2012.

Dance critic and dramaturge Ingrida Gerbutavičiūtė got her MA degree at the Free University of Berlin. She is Head of Dance and Movement Department at Lithuanian Academy of Music and Theatre. Ingrida is contstantly publishing reviews in German and Lithuanian for dance magazines, online dance journals, runs various projects such as “International Dance Experts in Lithuania”, and the Berlin Festival “Litauen tanzt”.