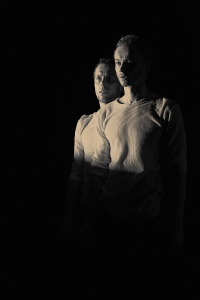 The flight by two men from New York (USA) to Kaunas (Lithuania) and its unfortunate ending in 1933 became a legend for Lithuanians in the very same year. The pilots Simonas Darius and Stasys Girėnas died on the way home, in the forest of Soldin that belonged to Germany at that time. Over 50,000 people took part in their funeral in Kaunas. The story is often told using big words, such as “national spirit“, “a hero“, “a heroic deed“. However, even this is sometimes not enough.

The performance came out of the desire to find a contact between the national heroes of the early 20th century and the individual at the beginning of the 21st. The artists question identity and rethink historical events which made a great impact on several Lithuanian generations. Who were Darius and Girėnas? Who could they be? The facts related to the former flight across the Atlantic Ocean are brought together and told contemporary, the movements of today’s bodies driven by the scars of yesterday.

Marius Pinigis, known best as a dancer of Aura Dance Theatre, is recently being also recognized as an emerging young choreographer and freelance dancer, as well as a dance teacher.

The relationship between Marius Pinigis and theatre began at Juozas Miltinis Theatre School, where he acquired basic theatre skills. He started his career as a member of Aura Dance Theatre’s studio while he was also taking part in creational works at the Academic Movement Theatre based in Vytautas Magnus University. To develop his dancing and performing skills, he participated intensively in various dance and theatre as well as martial arts workshops and courses.

During the almost seven years of his professional dancing career, Pinigis worked on around 20 roles and collaborated with many different, mainly European choreographers. Even though he started to dance, teach and choreograph independently, he continues to perform with Aura Dance Theatre.

The most recent dance pieces, where Pinigis created recognizable roles, were, amongst others, choreographed by acclaimed artists such as Jivko Jeliazkov (Average Speed of Answer), Johannes Wieland (Box Melancholique), Amos Ben Tal (Kill the Victor), Ferenc Feher (1863), and Deborah Light (The Curio Cabinet).

Mantas Stabacinskas is one of the most famous Lithuanian dancers, a teacher and a choreographer. During the almost sixteen years of his professional career, Stabačinskas has created over 30 roles and has collaborated with many different choreographers from all over the world. For eleven years he worked as part of Aura Dance Theatre (Lithuania), participated in various dance trainings and kept improving his professional skills in different workshops in Lithuania and abroad. In 2013 Stabačinskas graduated from the Lithuanian University of Educational Science with a BA in dance education and completed a Dance Course at Kris Cangelosi Dance Company (USA). Together with his long time stage partners Agnė Ramanauskaitė and Paulius Tamolė, Stabačinskas participated in the Open Stage program for young artists, hosted by Arts Printing House (Lithuania), and presented Contemporary?, an ironic contemporary dance performance for which he received in 2013 the Golden Stage Cross, the prestigious Lithuanian theatre award.

In the same year, Stabačinskas created memorable roles in the contemporary dance pieces Box Melancholique, 1863 and W(o)men. For these roles he received the Golden Stage Cross as the Best Dancer for Year 2013 and the Fortuna award for Best Dance.

With the piece ID: D&G both Pinigis and Stabačinskas debuted as freelance choreographers.