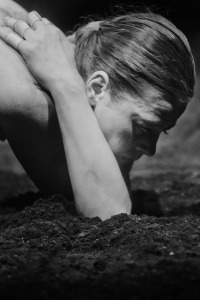 In Memory Loreta Juodkaitė dives into the depths of human memory revealing layer after layer the forms in a search for one’s true self. Choreography unfolds in a geometric square that represents four points of memory: memorization, storage of memory, reminiscence and forgetting. The stage becomes a ring for human’s fight with himself in attempt to fathom the meaning of his own existence.

Loreta Juodkaitė is an independent choreographer, teacher and dancer. She studied the basics of contemporary dance at Vytis Jankauskas’ Modern Dance Studio in Vilnius as well as in various contemporary dance projects and seminars in Lithuania and abroad. In 2001, she received a BA in Set Design Studies at the Vilnius Academy of Fine Arts. In 2005 Juodkaitė graduated from the Salzburg Experimental Academy of Dance in Austria (SEAD) and one year later she debuted on the professional Lithuanian stage, widely acclaimed by audiences and critics.

Juodkaitė’s performances were shown in several Lithuanian cities as well in Armenia, France, Germany, Israel, Russia, the United Kingdom, Turkey and Ukraine. In addition to her solo performances, she also cooperates and performs with companies, other choreographs and directors like Thomas Lebrun, Ziya Azazi, Kenzo Kusuda and Rachid Ouramdane. Salamandra’s Dream (2006, Arts Printing House) was created together with the theatre director Valentinas Masalskis who was awarded the Golden Stage Cross for Debut of the year.

In 2013 Juodkaitė established her own dance theatre.